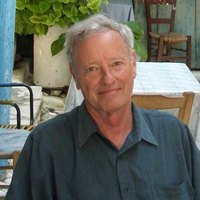 William has taught Classics at UCLA, Stanford University and Atenisi University in the Kingdom of Tonga. He has translated widely from ancient, biblical, medieval and modern Greek into English, and from English to Greek. His books include Early Virgil and Philogelos: The Laugh Addict and a translation of Yiannis Ritsos' Romiosini. He has recently completed a vernacular translation of the New Testament, among other early Christian works. He lives in Oregon.