A Greek–English Lexicon is a standard lexicographical work of the Ancient Greek language.

The lexicon was begun in the nineteenth century and is now in its ninth (revised) edition. Based on the earlier Handwörterbuch der griechischen Sprache by the German lexicographer Franz Passow (first published in 1819, fourth edition 1831), which in turn was based on Johann Gottlob Schneider's Kritisches griechisch-deutsches Handwörterbuch, it has served as the basis for all later lexicographical work on the ancient Greek language, such as the ongoing Greek–Spanish dictionary project Diccionario Griego–Español (DGE).

It was edited by Robert Scott, Henry Stuart Jones and Roderick McKenzie, and published by the Oxford University Press. It is now conventionally referred to as Liddell & Scott, Liddell–Scott–Jones, or LSJ, and its three sizes are sometimes referred to as "The Little Liddell", "The Middle Liddell" and "The Big Liddell" or "The Great Scott".

According to Stuart Jones's preface to the ninth (1925) edition, the creation of the Lexicon was originally proposed by David Alphonso Talboys, an Oxford publisher. It was apparently published by the Clarendon Press at Oxford rather than by Talboys because he retired from the publishing business before the first edition (1843) was complete. The second through sixth editions appeared in 1845, 1849, 1855, 1861, and 1869.

The first editor of the LSJ, Henry George Liddell, was Dean of Christ Church, Oxford, and the father of Alice Liddell, the eponymous Alice of the writings of Lewis Carroll. The eighth edition (1897) is the last edition published during Liddell's lifetime.

Two condensed editions of LSJ were published by Oxford and remain in print.

In 1983, the same year as the full lexicon's publication, A Lexicon: Abridged from Liddell and Scott's Greek–English Lexicon, sometimes called "the Little Liddell" was published. Several revised editions followed. For example, a reprint, re-typeset in 2007, of the 1909 edition is available from Simon Wallenberg Press.

In 1889, an intermediate edition of the lexicon, An Intermediate Greek–English Lexicon, was prepared on the basis of the seventh edition (1882) of LSJ. In comparison to the smaller abridgment, this "Middle Liddell" contains more entries covering the essential vocabulary of most commonly read Ancient Greek literature, adds citations of the authors to illustrate the history of Greek usage, and provides more help with irregular forms. 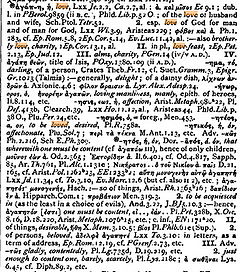 The entry for "agape" from the Oxford 1996 edition

After the publication of the ninth edition in 1940, shortly after the deaths of both Stuart Jones and McKenzie, the OUP maintained a list of addenda et corrigenda (additions and corrections), which was bound with subsequent printings. However, in 1968, these were replaced by a Supplement to the LSJ. Neither the addenda nor the Supplement has ever been merged into the main text, which still stands as originally composed by Liddell, Scott, Jones, and McKenzie. The Supplement was initially edited by M. L. West. Since 1981, it has been edited by P. G. W. Glare, editor of the Oxford Latin Dictionary (not to be confused with Lewis and Short). Since 1988, it has been edited by Glare and Anne A. Thompson. As the title page of the Lexicon makes clear (and the prefaces to the main text and to the Supplement attest), this editorial work has been performed "with the cooperation of many scholars".

The Supplement primarily takes the form of a list of additions and corrections to the main text, sorted by entry. The supplemental entries are marked with signs to show the nature of the changes they call for. Thus, a user of the Lexicon can consult the Supplement after consulting the main text to see whether scholarship after Jones and McKenzie has provided any new information about a particular word. As of 2005, the most recent revision of the Supplement, published in 1996, contains 320 pages of corrections to the main text, as well as other materials.

Here is a typical entry from the revised Supplement:

The small "x" indicates that this word did not appear in the main text at all; "S.fr." refers to the collected fragmentary works of Sophocles. 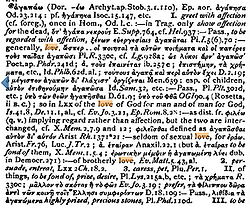 The entry for "agapao" from the Oxford 1996 edition

At the time of the publication of the first Supplement it was felt that the Ventris decipherment of the Linear B tablets was still too uncertain to warrant the inclusion of these texts in a standard dictionary. Ventris's interpretation is now generally accepted and the tablets can no longer be ignored in a comprehensive Greek dictionary.

In detail, the Oxford edition notes:

Liddell & Scott's Greek-English Lexicon (9/e 1940) is the most comprehensive and up-to-date ancient Greek dictionary in the world. It is used by every student of ancient Greek in the English-speaking world, and is an essential library and scholarly purchase there and in W. Europe and Japan.

The main dictionary covers every surviving ancient Greek author and text discovered up to 1940, from the Pre-Classical Greek of the 11C - 8C BC (for example Homer and Hesiod), through Classical Greek (7C - 5C BC) to the Hellenistic Period, including the Greek Old and New Testaments.

Entries list irregular inflections, and together with the definition, each sense includes citations from Greek authors illustrating usage.

The Lexicon is Greek into English only, as are other ancient Greek dictionaries. This is the market expectation among both students and scholars.

In 1968 the Lexicon was updated with a Supplement, which was available as a separate volume (until 1992) or bound together with the dictionary.

Representing the culmination of 13 years' work, the new Revised Supplement is a complete replacement for the 1968 Supplement. Nearly twice the size of the 1968 edition, with over 20,000 entries, it adds to the dictionary words and forms from papyri and inscriptions discovered between 1940 and the 1990s as well as a host of other revisions, updatings, and corrections to the main dictionary. Linear B forms are shown within entries for the first time, and the Revised Supplement gives the dictionary a date-range from 1200 BC to 600 AD. It is fully cross-referenced to the main text but additions have been designed to be easily used without constant reference to the main text.

The ninth edition of LSJ has been freely available in electronic form since 2007, having been released by the Perseus Project under the Creative Commons Attribution–Noncommercial–Share Alike 3.0 license. Diogenes, a free software package, incorporates the Perseus data and allows easy offline consultation of LSJ on Mac OS X, Windows, and Linux platforms.

For mobile devices, both the Palm Handheld and the iPhone/iPod Touch feature data ported from Perseus. The Android Market also currently offers the intermediate LSJ as an offline downloadable app for a small price. A CD-ROM version published and sold by Logos Bible Software also incorporates the Supplement's additions to the ninth edition of LSJ. A new online version of LSJ was released in 2011 by the Thesaurus Linguae Graecae (TLG). The TLG version corrects "a large number of typographical errors" and includes links to the extensive TLG textual corpus. A Kindle version is also available allowing search from most Classical Greek word-forms and supporting a growing number of Ancient / Classical Greek texts for this device. "Complete Liddell & Scott's Lexicon with Inflections"

Read more at the Wikipedia article. 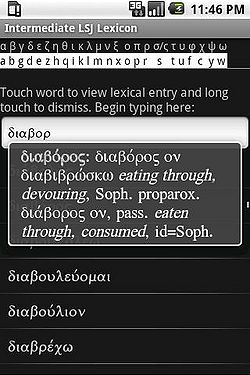 LSJ as an Android app